Mannington is selling their vinyl composition tile (VCT) business to Armstrong.  Mannington has been selling VCT for decades.  "Mannington will continue accepting new VCT orders until May 26, 2017...."

Those who have Mannington currently installed and want color matches for future repairs or additions should place orders now.  Architects who recently specified Mannington for future projects should change those specifications. 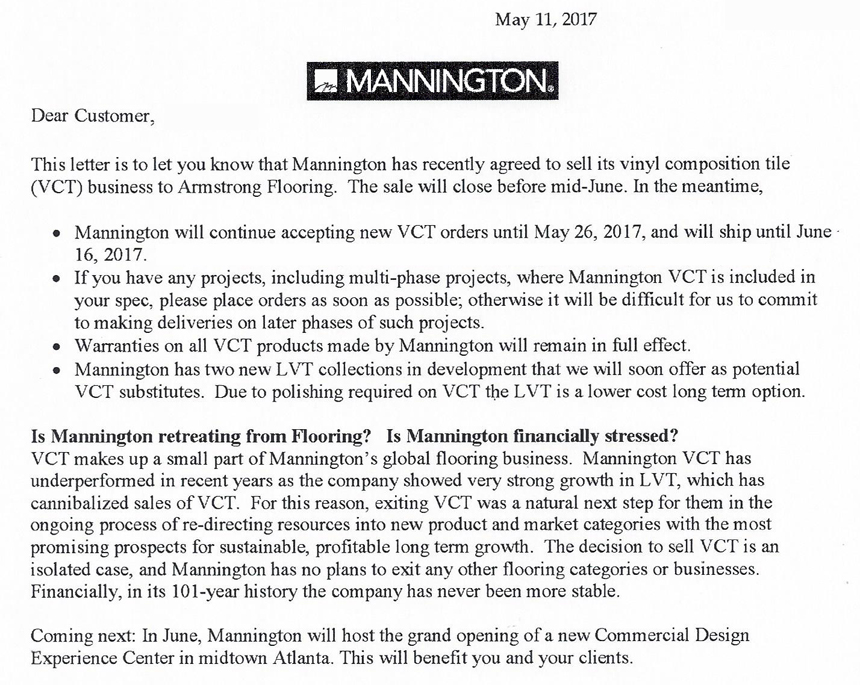 As a whole, Mannington has economic strength.  "Financially, in its 101-year history the company has never been more stable."  Successful companies focus resources where they can best perform.  "VCT makes up a small part of Mannington's global flooring business."  In truth, VCT is a minimized commodity offering a small profit margin to the manufacturers, the distributors, and the installers.

Wolfe Flooring has provided and installed Mannington's VCT throughout our company's history, so this is a major adjustment for us.  (Wolfe Flooring will continue to sell Mannington's carpet, laminate, and luxury vinyl.)  "Mannington VCT has underperformed in recent years as the company showed very strong growth in LVT, which has cannibalized sales of VCT."  Mannington has set their attention on the new rising star of the flooring industry:  luxury vinyl flooring (LVF).

Major changes were foreseeable due to the explosive growth of LVF in its two forms: luxury vinyl tile (LVT) and luxury vinyl plank (LVP).  LVF is much more appealing, and the benefits go further.  LVF can be installed for about twice the initial cost of VCT, but LVF does not require the stripping and waxing which is necessary for VCT.  Therefore, the life-cycle cost of VCT is higher than that of LVF when on-going maintenance expenses are included.  You may have noticed that Walmart stores (across the country) are changing from VCT to no-polish LVF.  To clarify, if a consumer is has a short-term commitment to their building (e.g., those renovating for an immediate sell), VCT remains the more economical choice.